In last Friday's glorious sunshine, I was standing in a wood in Waterbeach between Cambridge and Ely. It was hard to believe that this was a millennium wood, planted only 13 years ago, as the trees soared overhead and the cottonwool from the willow catkins filled the air.
It was the willow that was the reason for being there. Engineer Simon Smith of Smith and Wallwork had worked with architecture students at the University of Cambridge to design and build a footbridge across a land drain in the wood. They used a locally over-abundant source - willow, which nobody seems interested in coppicing any more.
The extraordinary thing about willow is its fertility. Cut it down, stick the end in the ground, and it starts to grow. This has been known for centuries and willow has been used for 'living' shelters and even for growing pieces of furniture - an approach that requires considerable patience. What Smith and his students were doing though was designing a footbridge that the public could use, and so was safe and could carry loads.
It was a tough job. We may have visited in the sunshine, but the hard work was done in winter, when the willow is least likely to be damaged by coppicing.
Having calculated the loads, and designed and constructed a simple arched structure, they then 'wove' a deck from slimmer willow. This was both to provide a walking surface and to prevent the arch elements sliding past each other. It was, admitted Smith, hard work, requiring strong forearms and a specially designed tool. One of the interesting things about projects like this is that volunteers will undertake work freely that most paid workers would refuse to do.
Health and safety required both the addition of a willow handrail, and the addition of a softwood deck to prevent people slipping. Sadly both in some way compromise the initial simplicity of the design.
The bridge is sprouting impressively. 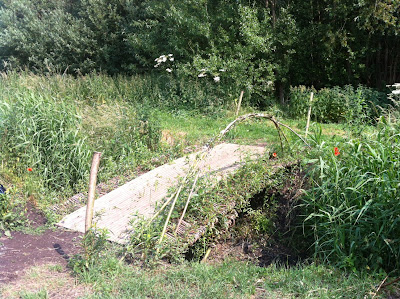 The next challenge will be renewal of the woven deck. Since this is not rooted it will eventually rot. Smith is trying to weave in the new shoots, but this may prove too difficult.
So this is not a perfect solution, but it is a great research project - lots of learning, and vision of new potential for a neglected material. It is great to know as well that a love of learning will galvanize people to undertake arduous work in demanding conditions. And there are even poppies growing on tbe bridge to lift the heart a little further.

Posted by The Rooflight Company at 02:00